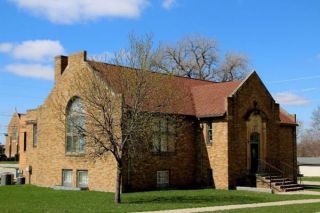 About the Gibson Memorial Library
Taken from a history written March 13, 1934, author unknown.

In 1873 the Creston Library was first opened in a building erected at the corner of Union and Maple at the expense of the Burlington Railroad. This company was interested in the founding of a library to furnish a pleasant place for the railroad employees to spend their evenings.

The room on the ground level was fitted up for the library and the space on the second floor was used for entertainment on weekdays and for religious services on Sunday. The rental of the hall was used for expsenses.

For many years the Library was in prosperous circumstances, but as time went on it slowly became involved in debt.

The Library was moved several times back and forth from the north to south side.

The Library was then opened in a room at the high school building. It was used for reference work by the students, but was also open to the public.

When the new high school was opened in 1889 the students had access to a library of their own at the school. The students, therefore, did not use the library as extensively as before.

There was now a noticeable lack of reading material for Creston citizens. Two attempts to get a Carnegie library failed.

In 1930 Mrs. Frank Phillips of Bartlesville, Oklahoma gave Creston $25,000 in memory of her mother, Matilda Gibson, who had been very active in church and charity work.

This money was used in buying the grounds and erecting a beautiful join clubroom and library. The Matilda J. Gibson Memorial Library was formally opened on April 7, 1931.

Join the Friends of the Creston Public Library as they host a Scholastic Book Fair for the Gibson Memorial Library located in Creston, IA.

The Book Fair will be at the Creston Depot-Congregate Meal Site, located at 116 West Adams Street in Creston, IA.

The Friends of the Creston Public Library will also serve a meal consisting of a hot dog, chips, cookie, water starting at 9 am on Monday, July 4, 2022 until they are gone!

Activity time intended for infants and toddlers up to 36 months with movement, music, and fingerplays!

Tuesday Night in the Park

Join us at Tuesday Night in the Park in Afton for a craft/activity. We will have a table set up so make sure to come and visit us!

Our Crochet Group meets every Wednesday from 1 PM - 3 PM. All are welcome to attend and crochet with these ladies to learn their tips, tricks and techniques!

Play a fun casual session of Magic the Gathering card game at the Library on Wednesday’s from 5 PM – 8 PM.

Welcome decks donated to the Library from the Bookwyrm will be passed out, while supplies last, to those who do not have a starter deck and wish to join the group!

This event is NOT sponsored by Wizards of the Coast LLC.

Use your creativity and architectural instincts to build your next masterpiece with LEGOs in the Gibson Memorial Library LEGO Lab. From 4 PM - 5 PM, LEGOs will be available for participants to build whatever their building savvy minds lead them to. If you feel like your brain isn’t hardwired that way, building challenges will be available to lead you in a more guided approach to your build. This is a come and go activity and is open for ages kindergarten through 12th grade. The library will provide LEGOs and we ask that participants not bring additional LEGO pieces from home.

Join children's librarian, Danielle, for a morning storytime at 10:30 AM! Come join in on the stories, songs, and activities!